This October, Pawsome Players will be taking part in our Purrfect Stream to raise money for cats and kittens in need by streaming fun activities online.

The event runs from 25 October to 1 November but online streamers are encouraged to get involved on any dates that suit them throughout October and November. 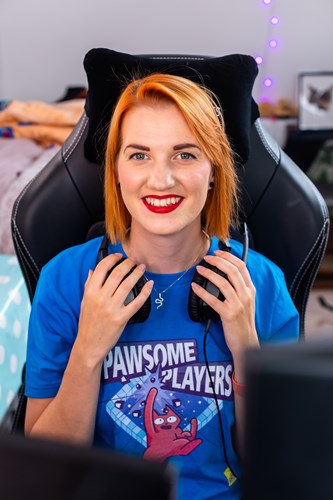 One of our Pawsome Players, Alex (streamer name Boardgameyogi) raised over £1,300 by baking cupcakes, playing cat themed games and played a video game featuring a cat protagonist. We asked her about her charity stream.

Why did you want to fundraise for Cats Protection? 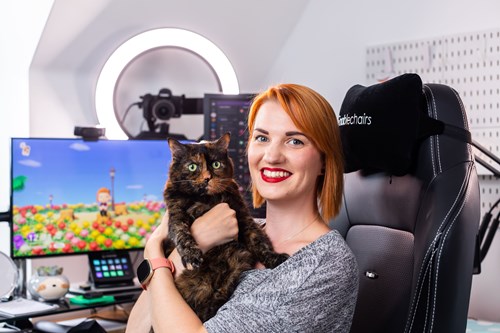 Alex with her own moggy Honey

I love cats to bits (I have three and they’re all rescues) and so for me Cats Protection is a cause that’s close to my heart. I spent a couple of summers working out in Greece and the cats there are beautiful but they are almost all strays and it’s quite heartbreaking to see how they are often sick and diseased and have no one to care for them properly. So it’s great to be able to do something back home to protect and care for cats that don’t yet have a home.

What did you do for your livestream?

I started by making some cupcakes that were supposed to have cat faces iced onto them but I did a pretty bad job! The cupcakes tasted a bit weird and the icing was too runny to hold its shape! But it was still a lot of fun to do some baking. I also played some cat themed games like What’s My Feline?, a game where my community had to guess what famous feline I was thinking of by asking yes or no questions and I also played a video game called Night in the Woods – a game featuring a cat protagonist and for that I enjoyed doing the various ridiculous voices for the characters we met along the way! 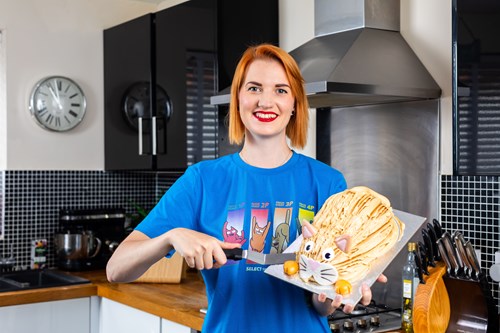 Alex with one of her cat-themed baking creations

Why did you choose to do a bake-along?

Initially I thought it was just going to be a lot of fun! A friend was supposed to join me but my stream happened at a time when lockdown restrictions were still a bit all over the place and no one really knew what they were supposed to be doing so I ended up doing it alone. I still had a great time though and baking is a fun way to be able to be creative but still have a chat with your community. The more you can include the community during charity streams, the better I think!

How did the livestream go – did you enjoy it?

It went incredibly well! We raised well over our initial target and I was absolutely blown away with the generosity of my community! And on top of that it was just a super fun stream for me to do! Reaching the various stretch goals have to be some of my favourite parts as it included me promising to do a stream where I go out onto the street in full cat costume (which I have yet to do)!