Mylo came into the care of our Lichfield & Tamworth Branch in 2020 in a terrible state, with severely matted fur and diabetes triggered by years of neglect.

Volunteers at the branch dedicated time and resources to bring the six-year-old moggy back to full fitness before embarking on a seemingly endless search for the right owner who would be able to manage Mylo’s health issues, including twice daily injections. 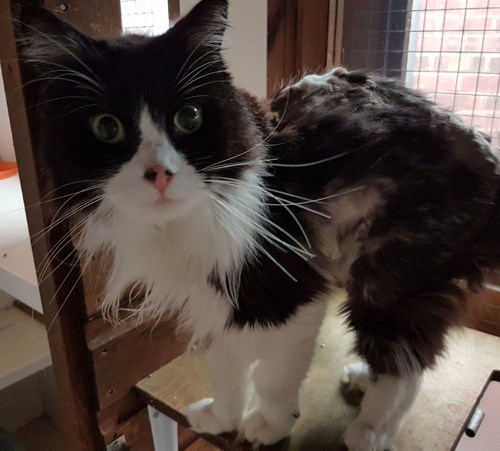 Many appeals later, Mylo’s profile was spotted by Sandra, who at the time was not even looking to take on a new cat, having only recently lost her 18-year-old cat Little Puss, who she had adopted at the grand old age of 16.

Sandra had also just taken on responsibility for 13-year-old Bobby, a deaf Highland Terrier who also has diabetes.

“I was browsing the internet with no intention of having another cat for a while when I saw a link for the Cats Protection site, and clicked on it and saw Mylo,” said Sarah.

“I clicked on his profile where it said he was diabetic and I just thought it was meant to be. There was some concern about him living with a dog but I explained how good Bobby is with cats and we went ahead with the adoption process.”

Mylo settled in from day one, revelling in all the fuss and attention, and paying little attention to Bobby, who in turn gave him his own space. 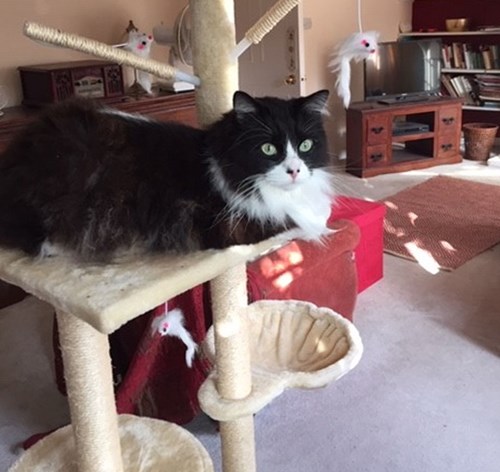 Mylo enjoying her favourite perch in his new home

The match could not have been more perfect as Sandra is a former nurse who is used to giving injections.

Sandra said: “It’s really about believing it’s just a quick prick which the animal barely notices, and giving a treat straight after, and knowing how important it is for the animal to have the injection twice a day, and on time.

“Mylo has his meal, then his injection, then one cat treat. He is so used to the routine already, that he sits and waits for his injection if I don’t notice he’s finished.

“I wouldn’t hesitate to take on another cat with special needs – it’s so rewarding, and really, no extra work once you get into a routine. While my morning toast is browning and my coffee brewing, I give Mylo his breakfast and draw up his insulin. When the toast pops up, I shake a bag of well-known cat treats and Mylo jumps up for his insulin then eats his treat – job done.” 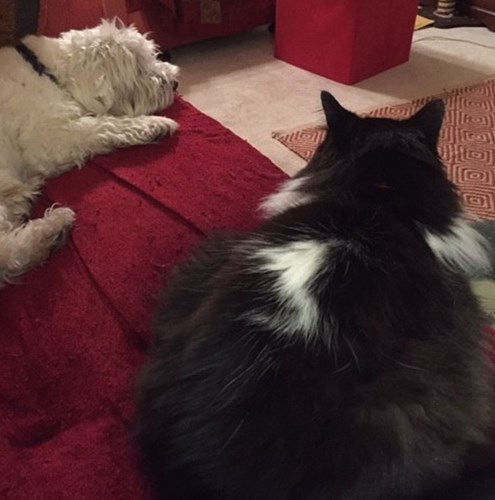 Sue Hocknell, Welfare Team Leader at the Lichfield & Tamworth Branch, is especially delighted to see that Mylo has slotted in to his new family so well, having fostered him for over a year, getting his weight under control and ensuring his diabetes was properly managed.

“I always said that if it wasn’t for my other cats I would have adopted Mylo as he’s such a lovely cat,” said Sue.

“To hear that he has settled in so well is wonderful to hear. We knew we needed an experienced cat owner who understood Mylo’s needs. It may have taken longer than usual to find him the right home but we finally found the purrfect match. We wish Mylo and his new family a long and happy future together.”