Since then, the 55-year-old cat fan has not only dedicated his time tirelessly to his role as a volunteer cat carer and brought his expertise to creating promotional videos for the charity but he has also raised over £1,500 by climbing two local mountains and running four-and-a-half marathons. 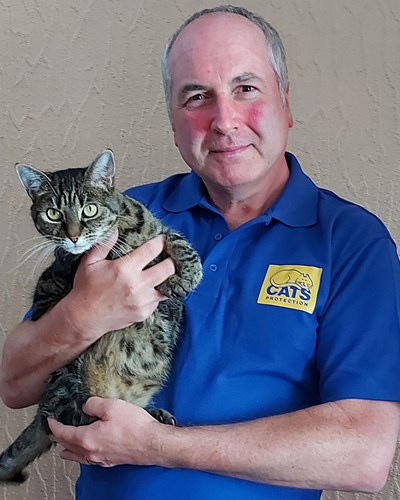 The Petplan and Association of Dogs and Cats Homes (ADCH) Animal Charity Awards take place annually and recognise the hard work and dedication put in by teams and individuals in the animal charity sector who have gone the extra mile to help rescue and rehome animals in need.

The awards received over 6,000 nominations and David was selected by the independent judging panel for a special commendation in the Volunteer of the Year category which led to Bridgend Adoption Centre receiving a donation of £250 from the Petplan Charitable Trust.

David began his fundraising for the charity in November 2020 after COVID-19 restrictions prevented him from both volunteering and taking part in the Swansea Half Marathon which he had signed up for in aid of the centre.

Determined to honour the commitment he had made in return for pledges from generous sponsors, as soon as restrictions allowed more than local travel David plotted an equivalent distance along a COVID-safe 14-mile route.

David ran from his home in Pentre, over the Bwlch Mountain, down in to Nantymoel, along the old railway line into Brynmenyn before running across Bryncethin Common to the centre, raising over £566. As the COVID-19 restrictions continued to be extended, David found other ways to help the centre’s cats. 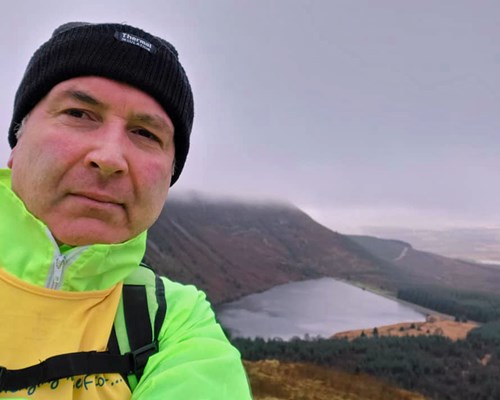 David on one of his epic challenges. Credit: David Moulden

“While the centre was closed to the public and volunteering was paused because of lockdown, I wanted to find something to keep me busy and still help out,” said David. “I knew the centre had needed to put all its face-to-face fundraising on hold and because I have quite a physical job I knew I could push myself for the fundraising challenges and raise money for the centre at the same time.”

David went on to take part in Climb for Cats in January 2021 at which he raised another £545 by climbing the Bwlch and Rhigos mountains and then ran Miles for Moggies in April and completed four marathons during the month, once again making over £500.

“I wanted to pick difficult challenges, things that would really stretch me so that I felt I’d truly earned people’s donations and tried things that other people might be less likely to do. People are so generous and give really remarkable amounts so I wanted to really push myself.

“In hindsight running every day to cover the distance of four marathons in a month was more challenging than I expected but Gina from Cats Protection’s Events team really encouraged me and supported me when my confidence wavered.”

David has now been able to return to volunteering with the cats that inspired him to complete the challenges but he’s not ready to hang up his running shoes quite yet as he is still registered to run the Swansea Half Marathon which he hopes will go ahead in October.

When asked about the commendation he received for his efforts, David said: “It’s never been about me, the cats and work of the centre have always been my focus. Everybody at the centre is so hard-working and supportive, I was really shocked, surprised and humbled to receive the letter telling me I’d been commended. But it was a lovely surprise.”

Cats Protection’s Challenge Events Officer Gina Rogers said: “When David wasn’t able to volunteer at the centre from the start of lockdown last year, he immediately took action and started raising funds to support the centre instead of his usual role. I have been in awe of his commitment, his drive and his passion for cats. It’s been lovely getting to know David over the past year, little does he know he has motivated me to lace up my own trainers.”