Lincolnshire stray Leoni was taken in by our Skegness & District Branch in July after being found with her kittens in a garden in Croft Bank. 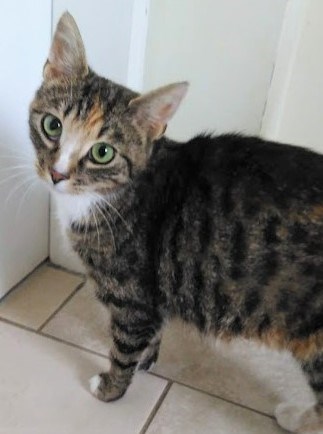 Lovely Leoni was cruelly attacked with an air gun

A vet check revealed that the 18-month-old moggy had two air gun pellets lodged inside her – one behind her ear and another in her neck.

Volunteer Fiona Smith said: “Poor Leoni must have been in agony for some time from her injuries, yet still she was caring for her five young kittens.

“At 18 months old she’s barely an adult herself yet in her short life she has been attacked with an air gun, fended for herself as a stray and reared five kittens. And after all that, she’s the friendliest cat I’ve probably ever come across.

“The vet noticed something wasn’t right because she felt a bump behind her ear so did an x-ray and that’s when she saw the pellets. It was such a shock to hear that somebody had done something so cruel to her.” 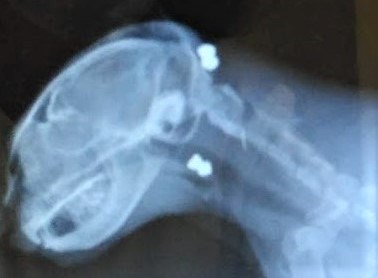 Leoni needed surgery to remove the pellets to prevent future complications due to their location. The branch has now launched a fundraising appeal to help with the £200 cost of her treatment.

If you would like to donate towards Leoni’s care, you can visit the branch’s JustGiving page.

Fiona said: “Leoni is a delightful cat and we’re so pleased she was discovered and we could get her the help she needed. Along with surgery to remove the pellets, she’s also now been neutered and her future looks much brighter.”

Leoni has been rehomed with one of her kittens, Leonard, while her other four kittens have also gone to new homes.

Sadly, Leonie’s story is not a one-off with many cats attacked by air guns every year, often sustaining life-changing or fatal injuries. Although official figures are not collected, Cats Protection’s monitoring of media reports shows that in 2020 there were over 100 reported cases of horrific air gun attacks on cats.