Boo has been reunited with his overjoyed owners Martin Kingston and his partner Alex after going missing from their home in Gosport more than a year ago.

The tuxedo moggy was especially precious to the pair as he previously belonged to Martin’s mother, who had doted on Boo until she became too ill with dementia to look after him. 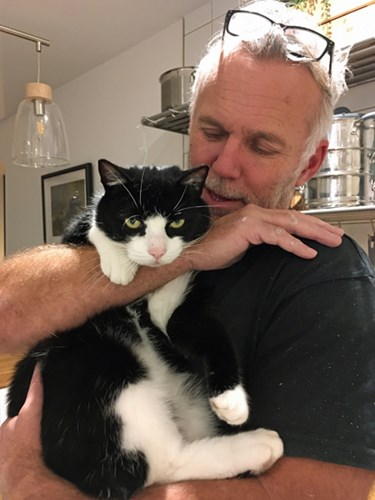 But two weeks after moving in with Alex and Martin, Boo went missing in October 2019. They got in touch with their local Gosport Town Branch of Cats Protection to report him missing and provide his microchip number. He was also added to the branch’s list of missing cats, so they could put out pleas on their Facebook page to try and find him.

Nothing was heard of Boo until December 2019 when he was spotted in a car park catching mice not far from Gosport’s The Range store, but sadly he was not seen again until he started entering the store in August 2020. 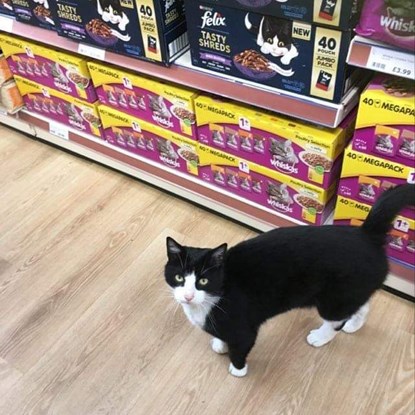 Luckily cat-loving staff members at The Range, Danny Flanagan and Suzie Hammocks, took responsibility for Boo when he started visiting regularly. They had made local enquiries which led them to believe he lived in a neighbouring road rather than two miles away where Martin and Kate lived.

Danny and Suzie provided food and a bed for Boo, to stop him eating the store’s supplies and using the soft furnishings to sleep on, until Danny spotted an appeal to find Boo on our Gosport Branch’s Facebook page. They compared Boo’s markings with those in his photo and realised their straying loner was in fact a much-loved pet. Store manager Shane Stuart immediately got in touch with the branch to get Boo returned. Gosport Lost & Found Volunteer Carole Rudin explains: “When I arrived at The Range I spotted Boo watching customers and staff go about their daily business. He was quite happy to say hello, which made it easy for me to scan him for a microchip. Ping went the scanner and I already had Boo’s microchip number which made it easy to confirm it was him.

“I immediately got in touch with Alex and Martin who were overjoyed that Boo had been found. We know staff and customers at The Range were sorry to see Boo leave, but we’ve had an outpouring of happiness via our Facebook page from people pleased to know he was going back home where he belonged. 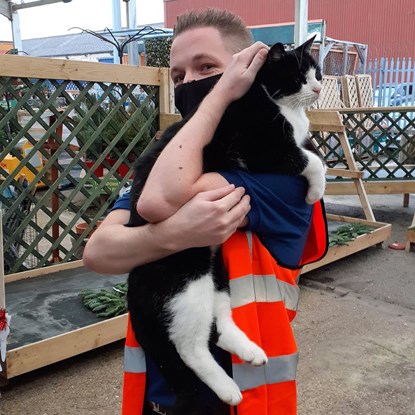 Danny Flanagan from The Range with his buddy Boo

“We would urge all cat owners to make sure their cat is not only microchipped but also that their contact details are up to date. All it takes is a quick phone call to the original microchip company. An up-to-date microchip really does give us the best chance of uniting cats and their families once more.”

Martin says: “I can’t thank staff at The Range enough for taking care of Boo. We looked everywhere and offered a reward, but couldn’t find him. When Alex called me in tears to say Boo was back at home sitting next to her, I was so happy; it makes me go cold just to remember it. 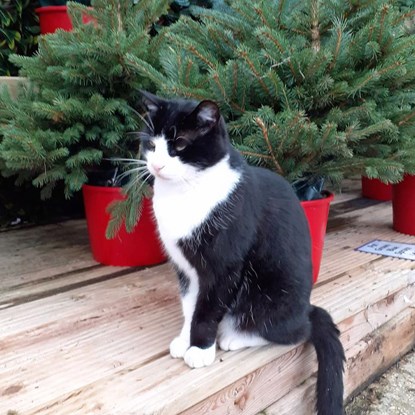 “It had been a really awful time for us because Boo disappeared in October 2019, then my mother passed away in August this year, 10 months after Boo went missing. So having Boo back is just amazing. He’s a little bit wilder since he’s been home and always wants to be fed but he’s still the same Boo. He’s such a character. When I saw the pictures of him making himself at home in The Range it was typical of him to be so relaxed around people. He really is a great cat.”

Cats Protection is calling for a change in the law to ensure that all owned cats, like dogs, are microchipped.

Microchipping is a safe, permanent and cost-effective method of identification which ensures cats like Boo can be reunited with their owner should they go missing. It also means lost cats are not mistaken as strays and taken in by rehoming charities. However, Cats Protection’s CATS report estimates there are over 2.6 million cats in the UK that are not microchipped.